The Touchy Matter of Getting Old and Possibly Dying

Dear Therapist Nicholas, I seem to have reached The Age of Others Keeling Over. People keep getting old, falling ill, some actually dying. This sort of thing has happened before, but back then it was an aberration, cases of dying too young. Now I’m 68, healthy, and still blessed with an adolescent sense of  immortality that I hope to keep for a long time. But I’m seeing a trend around me.

I saw this exit-watching process happen to my mother. She was 56 when my father died.  Three months later her mother died. And then friend after friend, and she had the misfortune of having an enormous number of friends. Once she went out of town for a week and when she came back she found on the kitchen table the obits of three friends, placed there by brother Franc with a vase of flowers.

Her father died. Her younger sister died. Children of friends started to go. I didn’t see how she could stand it.

But she’s still keeping on. I have a feeling, and a hope, that I have a lot of her longevity genes. If I’m right, I’ll likely have a similar experience of getting old.

Some years ago I began to notice in the paper the obits of the ruling generation I covered as a young newspaper reporter in Raleigh. That generation was twenty years older than me and and they had begun to make their exit.

This week I learned that the dear neighborhood pal of my earliest childhood died in January. That’s her on the left. She was two years younger than that sophisticate on the right. We were a couple of little fashionistas, as you can see. 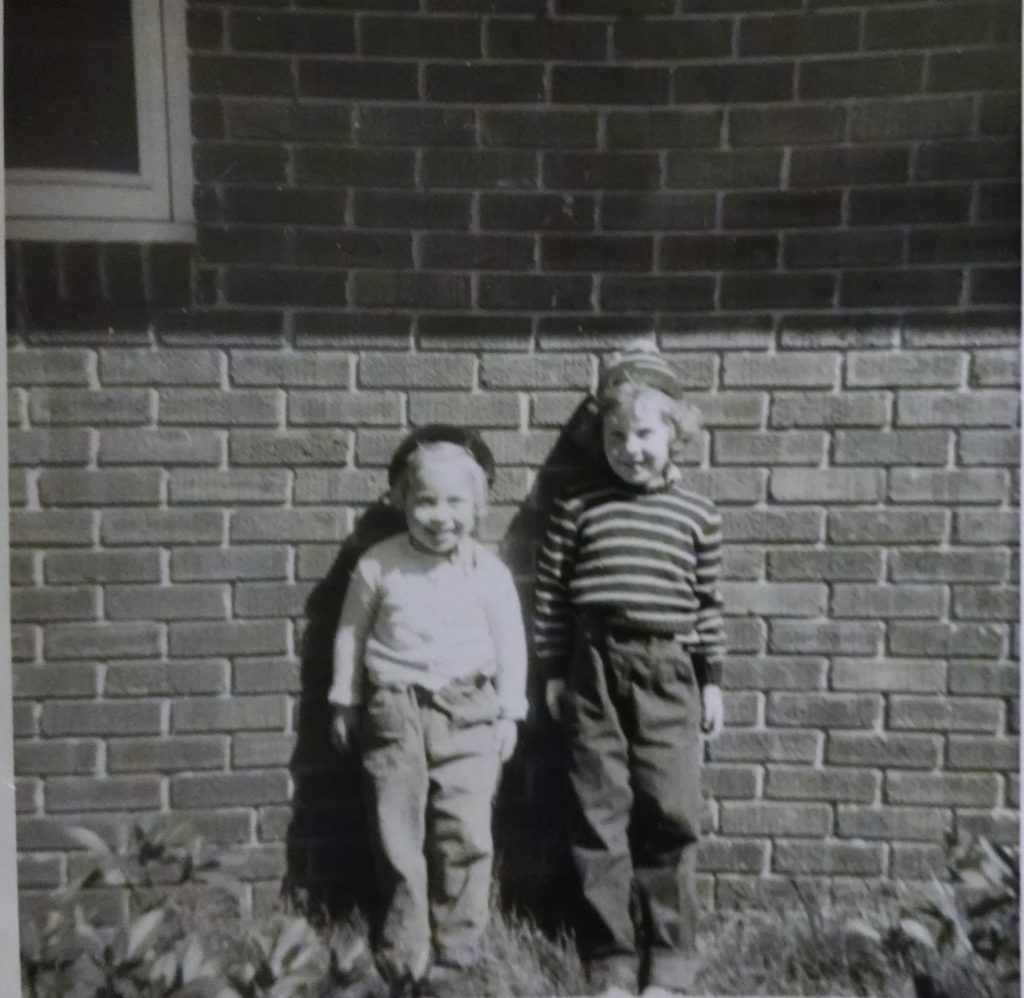 This “exit” business comes as a shock, never mind that we all know it’s inevitable.

Years ago, a book review in The New York Times said my novel Sister India showed me to be “a writer with a keen sense of the precariousness of our lives….” That surprised me. It’s true that the story is set in the Hindu holy city on the Ganges believed to be the most auspicious place to die. However the story’s about a guest house full of travelers caught in a city-wide curfew with the troubled inn-keeper and the man she secretly loves. I didn’t think I was writing about precariousness of life or that I had any such sense. I was sure I didn’t. Now I’m starting to acquire it.

The awareness does add a sharper edge to appreciation for being alive, for my loved ones who are living. And so far, I’ve been lucky. Several of my people have survived recent close calls. Both those situations are likely at some point to change.

Unless, of course, technology comes to the rescue as I foolishly trust it will.  The arrival of hot rollers in my life back in the early 60s first gave me this confidence. I’d begun in my very early teens to have serious concern about whether I’d ever be able to get married, since it was absolutely necessary for me to sleep in pink foam rubber curlers. Surely I couldn’t let anyone outside my family of origin see me with my hair rolled up. Then came hot rollers, which did the job in a few minutes in the morning. The problem was solved.

In fact, technology has already saved the day for me lately. What happened to my mother almost forty years ago — losing her husband and mother three months apart — would have happened to me this past winter, but for good luck and good medical treatment. Bob had his very close call in December, Mom in late February. Both got good treatment and survived. These outcomes are both sobering and wildly encouraging.

At some point, though, I’m likely to discover — in a gut way — that they and I and quite a few others are going to die.

Some years ago, I was discussing with my psychologist husband the situation of a man who was losing his wife to cancer. Going through that, Bob said, can bring a person “closer to life.” I saved that perplexing phrase for later consideration, no doubt knowing that at some point it could come in handy.

It’s paradoxical of course to think that facing death brings you closer to life. And what do the words really mean: how can you get closer to life than being alive?

What makes that greater closeness, I now discover, is coming to know more intimately the most profound experiences of being physically and emotionally alive. I suspect anyone who has a child gets an early dose of that immediacy. But in the course of daily routines — work, errands, getting things done — it’s probably pretty easy for anyone to lose awareness of the deep stuff. The raw emotion, the pulsing messy heated bodily life.  The precariousness.

Our forgetting and the shocks of re-connection are both no doubt necessary; who could stand a constant awareness or a permanent detachment?

More on all this later, obviously. Thanks for listening.