Dear Nicholas, A commenter on a post of mine about dealing with death, The Age of Others Keeling Over, wrote, “Baby Boomer navel-gazing always astounds me.”

I don’t think it’s navel-gazing to react to the increasing number, as one ages, of deaths of friends and family.

However, she does have a point. I lead a hyper-examined life–and I make a career out of carrying on about that here and elsewhere.

So now I will gaze upon the question of whether I think that’s good or bad.

First, a loftier term for the exercise:

From Greek, omphalo (navel) + sképsis (look, observe, examine) (The first time I typed sképsis, it came out sepsis, a poisonous mistake from either auto-correct or me.)

Dictionary definition 1: “contemplation of one’s navel as part of a mystical exercise.”

Dictionary definition 2: “…More often, it describes being so wrapped up in yourself that you lose track of the world around you….”

In the Hindu system of chakras, or energy wheels in the body, the navel or solar plexus chakra is associated with fire of digestion, self-esteem, and assertiveness. In short, fire in the belly.

Omphalos was the name given to an early Greek stone symbol of the center of life,  believed to allow direct communication with the gods. 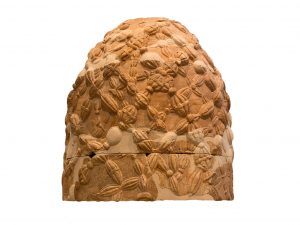 The Omphalos stone from Delphi Photo by Lefteris Papaulakis

When people now use the term navel-gazing, however, they usually mean thinking about one’s self rather than taking action for the good in the physical world.

I’m a big fan of taking action. I never admired the idea of hanging out in order to find one’s self.  We find ourselves in the course of action and in relationships.  However, communicating with the gods or simply thinking can assist in choosing right action.

Navel-Gazing, As If It Were Easy!

Most of us have trouble stopping everything to meditate. There’s good reason for it to be referred to as an exercise. Like sitting down to write, it often takes some force of will.

So boomers are bad about navel-gazing, meaning we do a lot of it. Yes, and we’re an impressively activist generation, fomenter of useful revolutions. (Though I was never the most active of activists myself.) All that contemplating can lead to action.

What About The Cons?

Overthinking can certainly be bad. So is second-guessing one’s self. Having, as I do, a case of the scrupulosity version of obsessive-compulsive disorder, I’m pretty bad about repetitive doubting. It’s destructive, a waste of mental time and emotional energy, though I find I can obsess and do routine chores at the same time.

Also, meditating when the house is on fire is not the best choice.

And what about plain self-absorption to the point of neglecting responsibilities to other people? Obviously a bad idea. (See tissue box above, a birthday present from an activist friend who also leads an examined life.) Still it’s possible to reflect, meditate, examine, contemplate, or gaze, without doing such harm. In fact, I think it’s much to the good. I think of it as prayer.

At Rancho La Puerta, where I’ve taught writing and practiced some yoga and meditation. Photo by Bob Dick 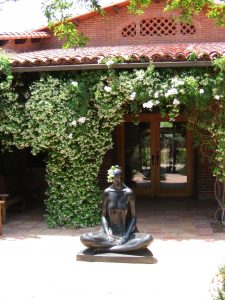 Another navel-gazer at Rancho La Puerta, in front of a yoga studio.

No doubt it’s a matter of finding balance between inner and outer focus, and balance is usually pretty tricky.

So that’s all my navel-gazing for now, Dr. Nicholas Stratas. (I decided to out you–surprise!–after learning that some readers thought you were a fictional therapist. ) I welcome thoughts on this matter from any and all.