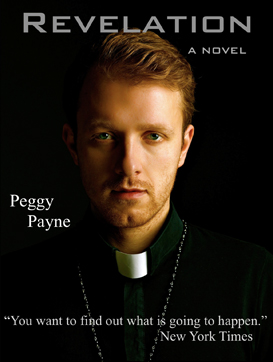 In the North Carolina college town of Chapel Hill, a cool-headed, intellectual minister is grilling shish kebabs in his backyard when he hears God speak to him out loud. The feel of spirit in this moment is undeniable. But neither he nor most of his congregation believe in a God who reaches out to them directly.

This shocking spiritual experience triggers a series of profound crises for the Rev. Swain Hammond, threatening to destabilize his marriage, his relationship with the church, his conscience and his very soul.

As wild temptation takes hold, this attractive but socially awkward, happily married young minister must wrestle with his impulse to escape the very thing he has been seeking.

“…Real emotional power… most readers will find themselves both satisfied and disturbed.”

“She treats an age-old subject… with a freshness that makes it real and relevant to everyday life.”

“Ms. Payne is quite good at conveying those rare moments when one is astoundingly aware that one is alive.”

The News and Observer, Raleigh

The aftemoon light in the sanctuary feels so different from the light in the morning. Different colors come through the stained glass. Maybe it’s all the flowers, yellow and white, that stand at both sides of the chancel. The people are seated and waiting. He moves toward the chancel steps. Miguel comes to stand beside him, and they both face the aisle. Louise is about to enter on the arm of her sister’s husband. Swain runs through their names in his head – Louise Elizabeth Berryman, Miguel Martinez Vasconcellos. The accent of the Spanish – he’s going to get it right, not anglicize. He runs through it again – and a scene unwinds like a scroll inside him. Gerona.

He is twenty years old, standing in a stone-walled room in Spain. The straps of his backpack pull at his shoulders. It’s quiet, blocks away from the narrow river and the arched bridges. In this room – he read it in his guidebook – there was a revelation. He stands with his two friends in a medieval landmark of the Kabbalah. It is the moment, unplanned, when all three have become quiet, when all he hears is the muted traffic from the street. He’s looking for something in this room.

Now Louise is coming down the aisle slowly, slowly. Moving in her long pale dress like a shadow behind the scene of Gerona, where he still stands. What is he looking for? He lays his hand on the grainy stone of the wall of that room. The feel of it sticks. Louise is before him, Miguel turns. It’s beginning. Yet he feels the damp grit of rock against the flat of his palm. He rubs his hand against the folds of his robe, it doesn’t rub off. He wears the tingling pressure like a glove. They’re waiting. The memory of Gerona drops away from him. He looks at their two faces. He wants them to be happy and never hate each other. He wants it to go well for them. For himself, he wants to find whatever he was waiting for in that room, for God to tell him something that is clear and sure. He wants to do something, find something . . . anything that will help. “Dearly beloved, ” he hears himself say. Faces stretch in a blur to the back of the church. He hears his voice float out to them, saying, “We are gathered here together . . . . ”