Dear Nicholas, I don’t know how to begin about losing Mom. Except to say: she died. My mother.  I don’t know what I want to “discuss,” except maybe just to talk about her. 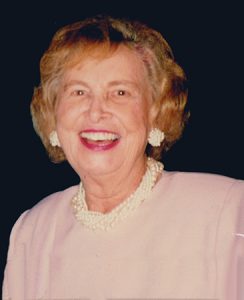 For so long, we — my brothers and I, and a lot of other folks — hopefully imagined that she would manage to stay with us, that she’d never die. Once, years ago, she said to my brother Franc that she needed to talk to us about matters related to her eventual death.

“You’re not going to die,” Franc said, “because you’re an alien and as others age around you it’s becoming more and more obvious.”  It’s true she seemed young in health and appearance into her eighties, young in spirit for all of her ninety-six years.

Up until five days before her death, she was avidly following political news (she voted Democratic) and golf (she was pulling for Tiger to make his come-back), and calling out answers to “Jeopardy” questions, and lobbying for a great grandchild (with a preference that the parents be married.)

Among her most marked characteristics were a tremendous relish for life and a genuine interest in almost everyone she ever met.  Up until about a year and a half ago, she was a pure extrovert. She and I once spent a week together at a Spanish language school in Cuernavaca, Mexico. I was fifty-something, she was seventy-something. For me, it was like being a devoted bookworm and having a sister who was head cheerleader. She was the most popular “kid” in the school.

After much travel, she found that Mexico was one of her two most loved places in the world: Mexico and Wilmington, NC (which of course included nearby Wrightsville Beach.) She came to Wrightsville the weekend after college graduation and had such a good time that she withdrew from the teaching job she had lined up for the fall. Instead, she went job-hunting in Wilmington the next week, and stayed on for seventy-six years.

One of the places she applied for a job was the World War II shipyard. As she was leaving the office there with paperwork about her application, a man who spotted her on the sidewalk stopped her and said. “I need to have a look at your papers.” His interest was purely personal. His name was Harry Payne and he was destined to become my father.

Eventually the two of them went into business together, opened Payne’s clothing stores and a large wholesale formalwear rental business. She handled everything financial, he handled personnel and sales. They chose the merchandise together and were a very successful team. She took pride in never using an accountant, handling all tax matters herself, saying “The federal government isn’t going to come up with anything I can’t figure out.”

The Gift of Certainty

I remember saying to a friend long ago, “My mother is blessed with the gift of certainty.” The friend said, “She must be very popular.” As I’ve already pointed out, she was.

When she and I had our inevitable painful friction, it was in large part about that certainty. She was a strong force to be reckoned with.  When I complained that I was too old (maybe thirty?) to keep being told what to do, she said, “I tell everybody what to do. Most of them do it.” But she did back off from instructing me, for which I was grateful. And I felt that in the process I gained an added measure of respect from her, which I cherished.

She was an excellent model for me in so many ways, for the woman I wanted to be: independent, resourceful, resilient.  One of my cousins pointed out this week that she cracked the glass ceiling before most people had acknowledged it was there. She and my father also modeled well an uncommonly happy marriage, a passionate marriage of equals. 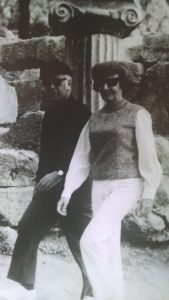 Paradoxically, she was a teetotaler who loved parties, an investor who got some of her stock tips from her dreams, a socially proper person with a breathtakingly wicked sense of humor. She was a lifelong devoted Methodist, with great respect for every religion. She was once called to jury duty on the trial of a guy accused of setting a fire at a synagogue. She was quickly dismissed. That guy wouldn’t have had a prayer.

She was always interesting and fun (well, usually.) And so often kind: she seemed to know the thing that someone secretly needed to hear. Once when I was in school, she wrote a note to a friend of mine that said among other things, “I approve of you.” I had no idea she knew what a tender spot approval was for that girl.

What she didn’t like was cooking. Once she had some women over for lunch and was complimented on the food and how pretty everything looked. She said, “Thanks. Would have been easier to run General Motors for a day.”

She always assured me that I could do anything in life, except maybe sing.  She was ever-supportive of my writing whether or not she liked the content. After she read my rather racy novel Cobalt Blue, she said it was powerful and she was shocked and maybe I might like to consider a pseudonym just for a little while, perhaps Marla Mason might be nice.

Her last five days, after her stroke, were hard. My brothers and I were with her at the moment of her death. Our minister cousin, her namesake Tuck, had prepared us well the day before, reminding us that this was a sacred time. That was the first time I had found the process anything but negative.

As you’ve probably gathered, she’s my hero, as I told her many times. Decades ago, my psychologist husband Bob said to me, “There’s gonna be some therapy when she dies.” Now I’m not so sure; she and I  long ago said everything that ever needed saying. 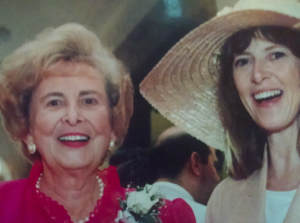 Mom and me at brother Harry’s wedding

I now–in this moment at least–feel that Mom has been released from what had become a tough and unfixable situation and she is now free and, I pray, in some way back in the presence of her beloved Harry Payne.  I want to hang onto that feeling. May need help with that.

Tags: being told what to do, blessed with the gift, devoted Methodist, do anything in life, excellent model, exuberant spirit, gift of certainty, measure of respect, my hero, need help, Payne's clothing stores, pure extrovert, respect for every religion, sacred time, she died, stroke, super-heroine, supportive of my writing, the loss, therapy when she dies, Wilmington, woman I wanted to be, World War II shipyard, Wrightsville Beach, young in spirit