Sending Out A Book Manuscript

Dear Nicholas, Thursday, after a bout of revising, I sent my new novel back to my agent. Sending out a  book is a big deal, perhaps akin to taking a child to their first day of kindergarten.

Sometimes I’ve felt bereft by the loss of the deep immersion in the story. I think I’ve mentioned before what I’ve called “post-draft nervous breakdowns.” Typically, three days of heightened sensitivity to the external world.

On Friday, after getting an enthusiastic email back from my agent, I wandered into Cracker Barrel for lunch and happened upon the perfect costume for book signings for this novel. 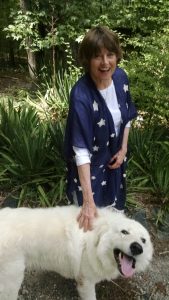 It’s about a girl who has an astral boyfriend, a spirit guy who’s visiting Earth to prepare for being born as a human. She’s trying to make him part of her normal high school life. (Wonderful book, by the way, just wonderful! I know you’ll love it.)

There, in the Cracker Barrel “Old Country Store,” I found this piece of astral clothing waiting for me. Midnight blue and covered with stars. As a vote of confidence in the book’s future, I bought it.

Back home, our dog took one look and had to get into the picture.  (His real name is appropriately semi-astral Northern Lights, but he goes by Carlo.)

Other Novels, Other Costumes

I’ve felt the need of special clothing for two of my previous novels.  For Cobalt Blue, a sequined outrage of a dress that I found in a thrift shop in San Diego for $6. In retrospect, I’m a trifle embarrassed by the too-muchness of that one. Still, it was fun at the time. I also had a cobalt blue cape, which arrived on a slow boat from China, and stunning thrift-shop sunglasses in the same radiant blue. 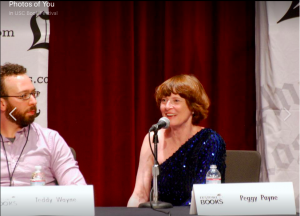 For Sister India, I wore Indian salwar kameez, in my own Americanized style, to bookstores and book clubs, some bought on my research winter in Varanasi, India, and some back home in the “little India” part of Cary, North Carolina. 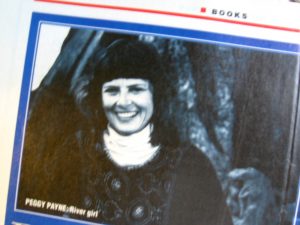 For Revelation, my first novel, it was enough to simply get dressed. First novel is a huge huge deal and needs no special effects. Also, the main character’s a minister and neither black ministerial robes nor a clerical collar felt like the right thing to do.

I do have one item of earlier costume I can wear again with this book: the cobalt blue sunglasses. They happened to be star-shaped. I hope I can find them. 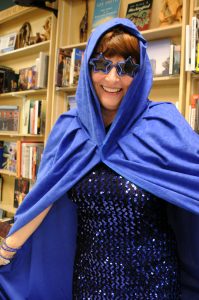 At Quail Ridge Books and Music, Raleigh, in full regalia

Sending Out A Book

Don’t expect any great news instantly. I’ve found that these things sometimes take me a while. But that would simply give me time to find more starry costumes, with accessories.

Now that I think about it, I once did arrive at your office in a celebratory mood with a small bottle of champagne. You rounded up a couple of coffee cups. I expect we then had a fruitful conversation, but I don’t really remember.