Nicholas, I seem to be fraying: some of my wiring, that is. I always thought “tightly wired” was a metaphor. But for about a year, I’ve had half a dozen tears in my left shoulder tendons. Now it seems that the same thing has happened in my left ankle. Guess my wires are pulled too tight. (Curiously, I’ve also recently had skin cancer and dental distress both on my left side. I’m a microcosm for the country: the Left is hurting.)

While I’m new to health glitches–I’ve mentioned this before–I’m long accustomed to the notion of being tightly wired. Meaning: hyper-focused, terribly earnest and pretending not to be, second-third-fourth-guessing myself, etc. Everybody knows what tightly wired means. And it’s probably just free-floating fear, being a-frayed of not getting things right.

But I didn’t know that the wires could actually fray. I’m sure it’s my reaction to stress–late-breaking response to the serious family illnesses in the last year. My psychologist husband accuses me of thinking there’s a psychological reason for everything; he thinks some things just happen. But as long as I think a problem originates in my head, there’s a better chance of solving it, which is encouraging even if not entirely true. Things that just happen can present quite a challenge. Best that I take responsibility for it, which is paradoxically another feature of being tightly wired.

So I’ve begun my campaign for getting serene and healthy. I started taking that unwieldy handful of vitamins and supplements you suggested. I gave up my sweet iced tea habit.  Instead, quarts of water and no caffeine and a radically reduced amount of sugar. I now brush my teeth after every meal and snack. I stepped up the exercise and meditation (a little.) I went back to yoga, even though one arm doesn’t lift right. Now in addition to the arm problem, I’m wearing a big stiff black boot to immobilize my ankle, very fetching. And yoga? Awkward. 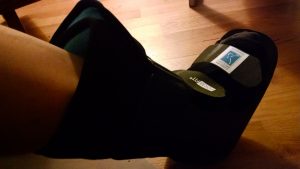 I am very lucky that none of these health blips are serious, just mildly painful, time-consuming, and in some cases expensive. However, the sudden eruption of them does bring mortality to mind,”mortality” being a comfortably abstract euphemism for death.

While these problems aren’t serious, this morning on my ride to my office I did start thinking about who I’d like to officiate at my funeral. Didn’t come a conclusion. (Just occurs to me, how about you, Nicholas? You’re going to live forever and you’d certainly have stories to tell.)

This afternoon while I was having my first root canal wearing my first orthopedic boot, my dentist said to me, “You’re probably not going to go to your grave with this tooth.” However she thinks it should last fifteen to twenty years. Not bad! That would get me, at best, to age 88. By then dental work will probably be done instantly by smart phone. And certainly I’ll live that long.

Death also comes to mind because I’m reading psychiatrist novelist Irvin Yalom’s fascinating new memoir Becoming Myself. He’s in his upper eighties with some heftier health glitches and he writes a lot about facing death. His website has a GIF showing him transforming from 20-something to 80-something. I plan to send him my novel Sister India set in Varanasi, the place that’s most spiritually auspicious for Hindus to die. His book tells of his time in that city of burning pyres on the Ganges.

The Challenge of “Never”

My physical therapist tells me that the shoulder pain is never going to go away completely, even if I were to have surgery. I take that as a challenge. You once told me yourself decades ago that I’d never completely shake my eating disorder. But I did! I did! It was a good strategy, your saying that.

I’m ready now to shake these shoulder-ankle-teeth-and-skin problems. Not going to accept them as a stage of life. So: more meditation! More protein!