Riding out Hurricane Florence in Wilmington

Dear Nicholas, I’m sorting through the emotional results of riding out Hurricane Florence in my hometown of Wilmington. I was there ten days, nine without power. My brothers and I were keeping Mom company; she’s 96, has sat out many hurricanes there and didn’t want to evacuate. 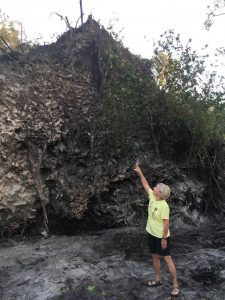 Root ball of a fallen water oak on Mimosa Place, where I grew up. The model, Margery Garrabrant, owner of Just Like New Shoppe in Wilmington, used to babysit my brothers and me.

This is not a position paper. It’s an effort to figure out where this wild ride led.

First, my family was lucky: no injuries to any of us or serious damages to our property. The one sad exception to our good luck hit my nephew Walker.  A few months back he had finished a project turning a shed into a free-standing mother-in-law apartment. He’d done beautiful innovative work, including a bed that came out of a wall when you touched a lever hidden inside a book. The place was charming, so well designed, an elegant piece of woodwork.

The hurricane flooded it with five feet of water, leaving massive damage. He didn’t own it but it was his artistry; seemed to me a lot like losing the completed manuscript of a novel.

I went to Wilmington from where I live near Chapel Hill the day before the storm was to hit: arrived late in the day Wednesday. Rain started coming down hard mid-afternoon Thursday. 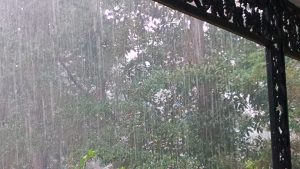 View from Mom’s window as the rain first began

The power went out after midnight.

A book I was reading for part of that time was a memoir by a woman who’d spent some of her childhood doing her bathing in a nearby creek. I didn’t feel comfortable complaining too much about my discomfort.

A Wet Towel and Lots of Peanut Butter

Still, it was hot! One night I slept on the stone floor of the foyer with a wet towel on me. Not very comfortable. I finally found a sleeping arrangement I liked, in front of an open outside door on a throw rug, with a battery-operated fan that also squirted water. There I read by flashlight and looked out at the moonlit night.

My brother Franc who lives a mile away from Mom and is a heroically good caregiver got power back first.  So in the last few days he brought hot food. Prior to that time we’d eaten mostly bread, crackers, peanut butter…

The dragging of the powerless days started to seem demoralizing to Mom and that seriously worried me.   On one day in particular, I feared for her. And then, with characteristic force of will, she got up and took a cold shower. I was impressed and reassured. 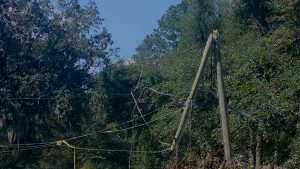 A block and a half down the street, after the storm. One reason our lights were out

And so what are the emotional impacts, resolutions, realizations for me for this week-and-a-half?

*I’m shocked by the losses so close by that I only heard about on the little transistor radio and read about after the fact: the houses flooded, the person who died in one of the shelters, the woman who reported fish swimming in her yard, the man who lost his wife and child when a tree crashed through their house. It was a microcosm of the situation in the world, living a comfortable life, when people elsewhere are fleeing violence on foot and in make-shift boats.

*People are so often kind to each other in a crisis and its aftermath. In the days after the storm when stoplights were dead, I repeatedly saw six lanes of traffic stop to allow a car or two cross from a side street. When I went looking for help for my phone that was refusing to re-charge in the car, I found  Cellular Sales in a building that looked wrecked by the storm. But there were cars in the parking lot. Inside I found the owner and two employees, all in damp T-shirts, helping everybody who came in with their phones.  They got mine to working again.

*I found myself uncommonly willing to accept help, without trying to figure out how I was going to immediately repay the favor. I usually don’t like to feel “indebted.” I think maybe this changed because I was already pitching in as much as I could. There seemed to be an easy natural flow of everybody doing what they could.

*My family worked so well as a team. Nephew Walker supplied the radio that lifted the spirits of those of us in the house. Franc was chief caregiver. Brother Harry arrived immediately after the storm and joined me keeping Mom company. It wasn’t supposed to be possible to get into Wilmington that day. Because of the flooding and detours, the two-hour trip took five hours. In the days after their power returned, Franc’s wife Willa was supervising a sort of rest area at their house, for those of us who wanted showers and electric outlets, etc.

*The “big team” seemed to be trying very hard too. Huge helicopters steadily passed low and loud over the house, carrying emergency supplies to the staging area in the parking lot of the nearby mall.

*The loss of so many huge old live oaks is sad. It’ll take two generations of humans to get oaks of such stature again, and they won’t be the ones I grew up with. 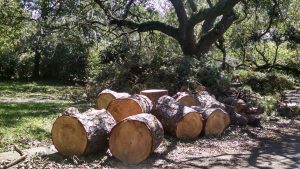 *The return of normal life sent me on a “high” that I wanted to hold onto and haven’t been able to. When the lights came on, I felt as if the end of a war had been declared. Drinking a Coke full of shaved ice was like coming out of a sensory deprivation tank into a world of color. I would love to savor every cold drink and every lamp that turns on in the same way. But now, only four days later, ice and light once again feel like normal background amenities.

*I don’t like feeling hemmed in. The first time I planned to come back home, it was impossible. All the roads were closed by flooding and damage. Wilmington was an island.  I stayed on then because I had to– and then I decided I didn’t want to leave until power was on and everything was working well again. That was fine when I decided for myself. It wasn’t fine when I was feeling fenced in.

*A long drive is a lot less boring when you don’t know if the road is going to go the whole way. Coming back finally, we found one highway  closed down eleven miles out of town. Had to turn around and go back. The route that worked finally took us 70 miles out of the way. It wasn’t clear for the first 115 miles of the trip whether we were going to be stopped again and have to turn back. 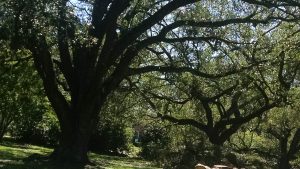 A couple of survivors on South Live Oak Parkway

*Throughout the storm and the days afterward, I felt more a part of the human network than I’m usually aware of. It was nice. I liked it. That’s something I’d like to hold onto too.

Okay, so maybe this has after all turned into a sort of position paper on riding out Hurricane Florence. Writing the experience down has, as always, helped me know what I’m making of it. I don’t think I’m finished with the process; there are still the big issues like global warming, berm-building, and whether we’ll get hit again this year.

In the meantime, thanks for listening. 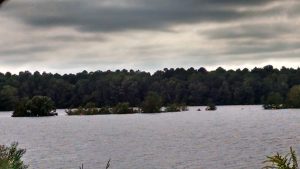 High water, an underwater peninsula at Jordan Lake near home, after my return