Dear Nicholas, Bob had his aorta surgery Thursday, got out of the hospital Saturday, and seems perfectly normal on Sunday night. In contrast, I’ve spent most of today on the sofa in a stupor of doze-snack-read-repeat. 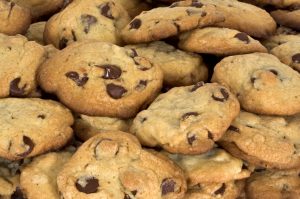 Do not dare to suggest that I back off the sweets!

It’s a tiny example of what I’ve always heard about the wear and tear on a long-term caregiver spouse. But the four-day experience shouldn’t turn me into a flat tire, even for a day.

It’s now clear to me: emotions are tiring,  perhaps especially when they are somewhat hidden from one’s self.

I knew this was not a high-risk surgery. No need to be freaked out about it. But there’s some of history of seriously scary moments in the medical care of Bob’s heart. I think the effect is never entirely gone.

This time I did not feel scared waiting for the surgery to be over. Both my brothers came to sit with me, and we had a fun time visiting. I didn’t feel worried. Not that I knew of.

Then the Buzzer Sounds

When the alert-the-family buzzer I’d been given signaled, I went to the desk and was told that the surgeon was ready to talk with me, so please go into the conference room to my left.

He couldn’t just come out into the waiting room and say Bob’s fine? We needed privacy for this?

Leaving my brothers in the waiting area, I went into the little room and took a seat. Minutes passed, seven or eight of them, I’d guess. I came up with a theory of what the doctor was going to tell me that would require a conversation but wouldn’t be too awful: such as, he’s doing fine, but we discovered that x or y still needs to be done. Nothing worse than that, I was sure of it.

However, at that point I was seeing my own heartbeat pulsing in my eyes, so that the room seemed to do a tiny jump about once a second. 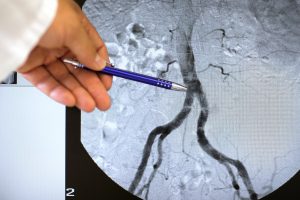 The surgeon steps in. This is the same man who, three years ago, did extreme emergency open-heart surgery on Bob and came out to tell me that Bob was alive but it wasn’t clear that he would wake up, there had been a crisis on the table.

Bob did wake up and, thanks to that guy’s skill and Bob’s general fitness, he has recovered amazingly well.

This time, it was a completely different conversation. Bob was fine, surgery went more easily than expected, he might even go home the next day. I’d be staying with him in the attending loved one recliner. 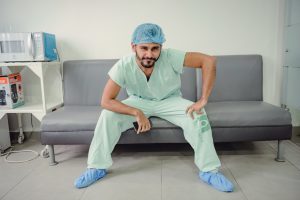 The conference room stopped pulsing. I said to the doctor, “Thank you, again.” He smiled. I was giddy with relief.

When I stepped out of the conference room, my 67-year-old twin brothers were standing just outside the door. I gave them the good news. They’d been out here trying to detect movement behind the translucent window of the door.  Franc accused Harry of trying to hear through the door. That funny and endearing picture–their caring so much–added to my glee.

Now everybody’s back home. And I could use a transfusion– of energy.

I have now regained just enough steam to tap this out, but not enough to go in the living room, turn on the TV, and watch movie stars get acting awards– and I love awards shows (who are they with? what are they wearing?) I hope my values aren’t changing.

I did think I’d learned to “be in touch with my feelings.” I guess I have, but in a such a circuitous way. 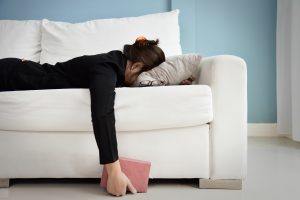 If not, maybe the patient can bring the caregiver spouse chicken soup.

Yours from the depths of my sofa,