Noticing is Nearly Everything

Dear Therapist Nicholas, I’m currently submerged in a 900+ page book that has reminded me, with the force of a large ocean wave, of the practice of noticing. It’s not much of an exaggeration to say that noticing is nearly everything. Paying attention is the practice that (ideally) precedes decision and action. It’s a requirement for success in love and work. It lets us know each other.

The book is Hugging the Shore, by one of my foremost writing heroes, John Updike. 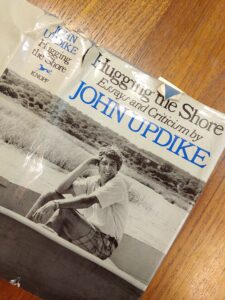 A massive collection of his essays and literary commentary published in 1983, it had been sitting around my house for a long time, ignored because I’d usually rather read a novel. But I picked it up recently, thinking I’d flip through, read a piece here and there. Instead I’m studying every page, underlining as I go.

First of all–and I’ll get back to noticing in a moment–the book is a one-volume substitute for a major in English or  comparative literature. Updike’s intelligence beamed on  the work of dozens upon dozens of authors well worth considering is, for me, simply delicious. He is brainy, sharply observant, wryly funny. Two bits of his critical humor I can’t resist quoting. On religion in work by Iris Murdoch: “The author, one gathers, believes in sex and Oxford.” On a story by Flann O’Brien: “Each chapter makes a fresh grab at the greased pig of a plot.” Yet he devotes most of the space to the trickiest aspect of reviewing, finding what is admirable in a book, explaining how and why  it works so well. “‘My purpose in reading,” he once wrote, “has ever secretly been not to come and judge but to come and steal.’

But More Important, The Noticing

In reading this book, I’m learning again to pay scrupulous attention. I’m being reminded by watching this writer pay scrupulous attention to what he has read–and by his pointing to the attentiveness at work on the pages of other writers. His own fiction has always been rich with particulars: “detail-sticky,” according to an essay by John Freeman on Updike’s “uninhibited fiction.”

Nosy From The Start

I was always an avid watcher, a note-taking kind of little kid. I perturbed people of all ages by staring. But my habit of watching–a little more discreetly as I got older–was greatly enhanced by two factors. One was the series of eleven conversations with you, Nicholas, forty years ago when I was thirty-two. These therapy sessions were aimed at noticing what was going on inside me. I had never been as good at that as I was at watching the outside world.  In the wake of noticing my inner world, I made big changes: I fell in love with the right guy and married him, and I switched from journalism to writing novels. Noticing can be high impact.

The other factor–at least the other one I’ve noticed–was reading the novels and short stories by John Updike. His stories are so sharply real because he makes fine distinctions; he is precise even about emotion.  This shows in what he has to say in Hugging the Shore about other writers. 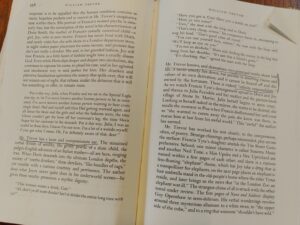 “Miss Murdoch devotes more than customary attention to the physical, earth world….” She describes rooms and the personalities of furniture, “the atmospheric nuances” of two adjacent houses in the English countryside, “distinguishably characterizing (an especially tender tour de force) each dog of a pack of seven, touching the canvas of her vision everywhere with sharp bright dabs of the recognizably actual….” See how he points to a specific in describing her own skillful use of  specifics?

How Do We Get Better at Noticing?

The only ways I know to do better at paying attention are:

For a start, I want to take in that the ocean wave is twice my height and beginning to tip at the crest, not simply that it’s big, that it’s “incredible.” And I note that #5, taking in my own response, was a thought late coming to me; old tendencies do linger.

If you know of other tricks for better noticing, please pass them on. Re-emerging into the world after the long covid hibernation, I am particularly eager not to miss anything.

A Side Note: On Being a “Fangirl” (or Fanwoman?)

I’ve read that the word “fan” is short for fanatic, and that would be overstating it for me. But I did go to hear Updike speak at Duke not long after my own first novel Revelation had come out. 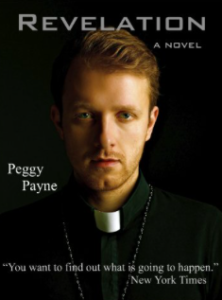 Carrying a copy of my novel as well as a couple of his, I stood in the book-signing line for more than an hour. (At the time, when I wrote an article about the experience, I knew exactly how long; but that piece is buried, pre-Internet, in a box somewhere.) I had advanced to within a few feet of the guy and his signing pen and his famous beak of a nose and his pile of hair, and suddenly he was whisked away to go onstage.  After the performance, I got in line again. After a long wait, I was standing before him with the copy of Revelation I wanted to give him. And a stage manager shouted for everybody to get out of the building immediately, it was time to lock up.

Before Updike could start to move, I pushed my novel against his chest. He wasn’t going to escape. So he called out to all of us, the whole long line waiting behind me, told us to hold our places and follow him. We did, across campus to the Student Union, with me close on his heels.

Finally, I gave him his inscribed copy of Revelation. He wrote in my copy of his Rabbit Is Rich. 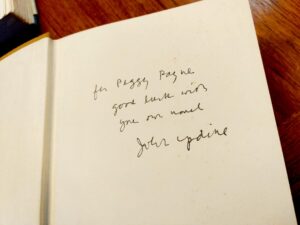 When the piece I wrote about this encounter appeared in the Research Triangle Park newspaper, a friend chided me about being so amateurish. Was this how a professional writer should behave? 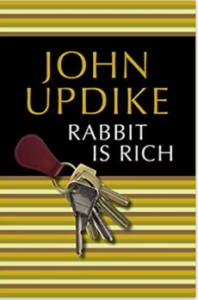 I never want to lose the exuberant delight of being a fan, and being a fan for particular precise reasons. But that’s for another email.

Please let me know if you have tips on paying attention.