The Sexy Spirituality of Tattoos

Spiritual tattoos are so hip I can only conclude that belief in a higher power is a lot sexier than it used to be. 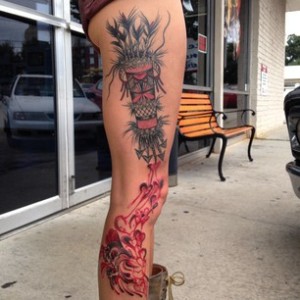 Once upon a time, a tattoo was a sign of an outlaw or an outlaw wannabe. And at the same time — in this country at least — outward signs of faith or references to God were often thought hopelessly dorky and prudish.

Both of those attitudes have radically changed.

Now tattoos are often a statement of faith. And spiritual tattoos are so hip that I can only conclude that belief in a higher power is a lot sexier than it used to be.

I remember owning a tiny blue Methodist Youth Fellowship lapel pin, but I don’t think I ever wore it and never felt the slightest urge to have it tattooed on my back. Nor would I have joined my high school’s Bible club: much too uncool. (i.e., not sexy.)

And so I watch with fascination as enormous religious/spiritual images bloom on so many people’s bodies.

The current tattoo culture, which began to rise in the 1970s, is one place where the intersection of sex and religion vividly displays itself — millions of times — to the world.

The Cool Church that Donated Tattoos

In Winston-Salem, NC, New Church has used tattoos as a metaphoric theme for a series of programs. A flyer went out to the general community announcing the give-away of two gift certificates for a tattoo. “We’ll do anything but sin to reach people with the gospel of Jesus,” said Bryan Tabb, the church’s music leader/ creative arts director.

“We’re not as edgy as this makes us sound,” Tabb adds. This is a church that teaches the inerrancy of the Bible.

The ministry was reaching out to people it might not otherwise attract including the disenfranchised, said C.W. Eldridge, founder of Tattoo Archive. This tattoo shop and museum moved to Winston-Salem seven years ago, after a start in 1980 in Berkeley, CA. It’s one of about 20 tattoo museums in North America.

When the local paper wrote about its arrival, there were angry letters to the editor for about a week, Eldridge said, asking why the paper would write about “something they considered blasphemy.”

Not everyone agrees that tattoos and spirituality go together. The religious are polarized on whether the images are a good idea. “The very word is a hot button,” Eldridge added. The no-ink crowd points to a verse in Leviticus saying not to mark the body. The pro-ink people interpret that differently. Read in context, according to sacredink.net, this verse is telling Israelites not to take up the particular tattooing practices of other religious groups of the time.

The Ink of “Alternative” Religions

Freeman, a Pagan priest and Hermeticist, responded to a Twitter call I sent asking to speak with people with religious or spiritual tattoos. He does not see his three images — including an eight-pointed star with red serpent entwined— as primarily decorative.

And yet — “My spiritual path includes sacred and magical sex,” he says. “I don’t automatically associate tattoos with attraction, but many of them are sexy, depending on style and placement.”

His own images represent his commitment and they encourage him. “The one on my thigh, especially (the star) reminds me how long I have been on this Way, and has perked me up out of the dumps a number of times.” His religion teaches that one should believe only in what one has personally experienced. “I find faith in the sense of ‘I have faith that my efforts eventually pay off’ useful and valid, though, and that is the faith these images boost.”

Pacific Druid Gary Sell is about to get three tattoos, beginning with a full back image of a Juniper tree “to infuse its magical properties into my essence….

“Juniper has aspects of Protection, Love, Anti-Theft, and Health.  I’m combining the aspects to protect my heart from theft, to stop me from wounding the heart of anyone, and to bring me joy and happiness in my life….Trees are a big part of my spirituality as a Druid, so the beauty and connection I feel with them is reflected in this art….I definitely find tattoos attractive.” 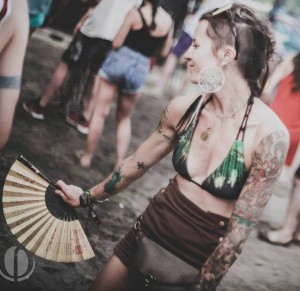 And from yoga teacher Lila Rasa Brown (shown in pictures and video):
“I have about 17 pieces on my body, and I love how they tell a story of my life….Many of the pieces are obviously spiritual, such as that of the goddess Durga, the fierce warrior goddess who’s also the mother of the universe, the one who holds things in balance….I definitely think tattoos are sexy (depending on what the images are), on men or women. Many of mine do represent a reclaiming of my own divine feminine energy and power…”

Most visibly, the celebrity world flashes spiritual tattoos. Soccer star David Beckham sports four Christian tats on his toned muscles, as well as quotes in Hindi (or Sanskrit) and Hebrew, according to frisky.com. Definitely sexy! It’s probably safe to say he wouldn’t go around wearing a church school perfect attendance pin on a shirt; to do so would announce belief just as effectively but detract from his edgy allure.

It May Be Hip But It Hurts

Getting a tattoo is painful. The experience could be treated as a religious rite of a passage, the willingness to suffer for one’s beliefs. But wearing a religious symbol (one that’s more flamboyant than a tiny gold cross) doesn’t lead to the the pain of being considered uncool. So tat believers are inking up with all kinds of faith icons — to gain an amulet of protection or a constant spiritual awareness, to make a statement, to belong — and they’re at no risk of seeming undateable by doing so.