The air is full of tributes today to witer Ray Bradbury who died at 91.  He deserves them.  He was an exceptionally-alive guy.  In fact I ran across one protest on Facebook from a writer who said that Bradbury had just Friended her.  So apparently he was active and up-to-date to the end.

I met him on a trans-Atlantic crossing on the QE2, a trip on which he was lecturing and writing.  The following is excerpted from a piece I wrote about the trip, the ship, and the writers thereon: "At Sea with my Writing." 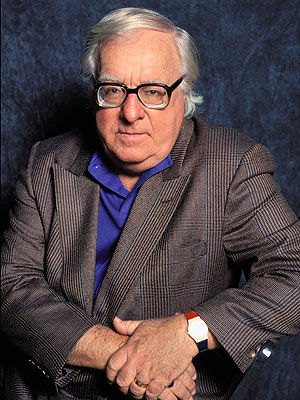 Yes, he is working on a new novel on this cruise, he said, while waiting to go onstage.  And he has written on this ship before.   On an earlier crossing he got an idea for a new novel the night he boarded.  He saw a passenger in a hallway, "some sort of English lord," a man whose face had been "horribly destroyed."  Bradbury was so upset by the thought of a man losing his face that he burst into tears.  And then he began writing.  He finished the first 100 pages of A Graveyard for Lunatics on that voyage, working at night on a soundless typewriter.

His speech was, like my stateroom, exactly what I wanted.   He told the audience how in 1929 when he was 12, he "fell in love with the future," and began collecting Buck Rogers spaceman comic strips.  "All the kids in fifth grade made fun of me."  And so he tore up his collection, then regretted it.  Doing that, he said, "I killed myself.  I killed the future.  I listened to the damn fools."

He returned to Buck Rogers, whatever the other fifth-graders might think.  When his big break came, years later, it was because of boyhood passions he'd held onto.  Director John Huston, on reading a Bradbury story about a dinosaur, called to ask if he'd like to write a screenplay, in the same spirit, about a white whale.

A few days later I was interviewing a fellow voyager, director Francis Ford Coppola, about his writing on this crossing.  We were sitting in the lounge outside the dining room.

Bradbury, formal in coat and tie, stopped to say hello.   Coppola had a question for him he'd been meaning to ask:  what were his favorite

science fiction movies of all time?  "Close Encounters of the Third Kind,"  Bradbury began, "it's flawed, but the closing minutes are

transcendent, with hope for the future…."

Like a lot of other people today, I'm wishing Ray Bradbury a happy celestial voyage, a crossing, to wonders as great as his optimism and  imagination.