This splendid orb was created for the 100th dropping of a Times Square New Year’s Eve ball. The New York Times started the practice in 1907. This piece was made by Waterford Crystal and a lighting company in 2007 to commemorate the century of these celebrations.

This ball now sits in the Times Square Visitors Center, with an inspiring commentary:“The ball has always been a physical symbol of second chances, new starts, powerful memories, and the promise of the future….”

I’ve watched the ball fall on TV many a time, but never thought of it that way. Now I will. Another legacy-to-be of my extra life-within-a-life in New York.

Today’s explorations took me to the downtown tip of the island of Manhattan and across to Staten Island, then up to 125th Street and Harlem.

Some of the best adventures of the day, and of this “life,” have come from taking the wrong train, or direction. I have a lot less patience with my wrong turns at home; it will take effort to bring that attitude back home.

Today was one of the “Summer Streets” Saturdays when about 7 miles of Park Avenue were closed to cars, and given over to walkers and bikers and bladers, etc. I walked about 30 blocks of that distance, and it was an interesting sensation to stroll down the middle of Park Avenue. Also noted, I became used to it surprisingly quickly.

An interesting bit of re-purpose transformation was part of this summery occasion: “dumpster pools.” Clean, unused shipping containers were transformed into swimming pools, three of them open for splashing at 40th and Park. Very imaginative, though the idea of trash still floated in my head. 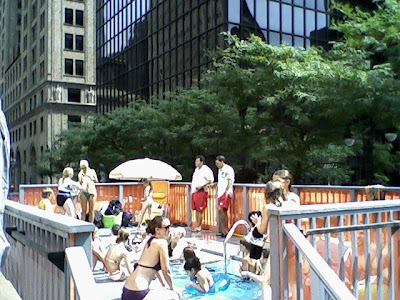 After a bit of lunch (food report: granola, with fresh raspberries, blackberries, strawberries, etc.) I decided on a boat ride. I’d never taken the ferry over to Staten Island at the bottom of Manhattan. Felt a welcome swell of patriotism, and pro-freedom fervor, as we cruised past the Statue of Liberty with her lighted torch.

Like a lot of passengers, I took the ferry for the boat ride. But then I decided to stay, walked around for a while in the historic part of Staten Island, old dark-shingle houses along such quiet streets. And hills! I hadn’t expected such steep climbs.

Landing again in Manhattan, I was set to come back to the apartment, but decided to linger long enough to find a scoop of ice cream. By the time I’d found it, I’d visited Wall Street and the site of the World Trade Center, which I wrote here just yesterday that I didn’t want to see. I’d feared it was asking for unnecessary pain to go there. But the familiar images of the attack were not there, nor did I see the visitor’s center and thought there wasn’t one there. I found myself instead looking at cranes, at a construction site that I didn’t recognize at all.

Once again an effort to head “home,” but: wrong train. I took an express rather than a local and thus overshot by about forty blocks. Which landed me on a wide commercial street of Harlem at dusk on a Saturday night. I emerged from the subway onto such a crowded festive-feeling sidewalk, I decided to wander a while before finding the “right” train.

Happening upon the famous Apollo Theater, where Billie Holliday, Michael Jackson, Stevie Wonder, and so many others launched their careers. I peered in, admired the chandeliers. A poster outside said that Tracy Morgan, who is on the short list of comedians I find really funny, would be taping a show there for HBO. But the place was locked up, and I didn’t know how long I’d have to wait, and so moved on. (Turns out I’d have had to wait until a Friday in September, guess I didn’t read that poster too carefully.)

Then I got a bit lost; asked a woman which direction Central Park was, as a way of getting oriented. She said, “Central Park? You’re a long way from there. You have to go to Manhattan for that. You’re in Harlem.”

But Harlem is part of Manhattan and Central Park was only a couple of dozen blocks to the south; it was as if she was in a different world. That I find troubling.

The next train ride was the last of the day, took me back to the apartment. I’d like to be able to pack this much into a Saturday at home.