The first day of the second half of my bonus life in New York felt like four different days crammed together. Yesterday was:

Evening haircut that felt like a Japanese tea ceremony.

And then today turned out to be a half-day. Time has been funny that way in this extra life.

Yesterday morning I started with the galleries, the cluster of them in the 57th street area. Clutching a torn page from a magazine guide, I found that finding each one was part of the adventure. The first gallery, curiously named Haunch of Venison (you’d think it was a rock band), turned out to be upstairs in the same building with Simon & Schuster, publisher of my first novel, Revelation. Huge erotic paintings formed a major part of the show: tangles of pink limbs based on photographs of moments in the life of the artist. In another room was a sound sculpture made by the amplifications of the faint noises of a foot bridge, with a weirdly fascinating video of vibrating cables. I loved the music of the bridge — a strange sort of wind chime.

Four other galleries forming a similar melange. One of the highlights in an exhibit on privacy was called Privet: a wall lighted from within made of green glass shards. A hedge forbidding and beautiful.

While I was hunting for these art spots, I happened upon a collection of a radically different sort: The American Girl Place. You may have heard of this doll that has become a cultural phenom. I had read about it, and the American Girl emporia that have become pilgrimage sites for pre-teen girls and their mothers.

I was never big on playing with dolls — I feel disloyal to Cuddles and Jane as I say that. But I’ve always liked miniatures. And this store for me was a museum of intricate and detailed miniatures: the customizable and child-like dolls in their bazillion different outfits and settings. And then there were clothes for children to match those of the dolls; a girl could get a photographer’s outfit (short loose jacket, serious working pants, and a beret) for herself and her doll.

Aside from the fascination of the miniatures, I was interested in seeing what a pro-girl-power message was conveyed. Be brave, be a leader, pursue your interests, follow your inner star. So valuable for girls of this age.

In the afternoon the meeting with a book editor: I pitched several ideas. She liked one, was interested in a proposal, but first wanted me to increase my blog traffic.
A much more complex and mysterious undertaking than writing a book.

The meeting felt relaxed and fine to me. But I felt wiped out afterward, wandering around in the heat in stupid high heels. I also realized I hadn’t had my daily caffeine and it was too late in the day for it.

But an oasis lay ahead: I had a 7 p.m. appointment for a haircut. It was with a student at a high-end salon; a $10 bargain I’d discovered in The Cheap Bastard’s Guide to New York City. I’d badly needed a trim at the time I got this apartment-sitting invitation and, in the flurry of getting ready, forgot about this detail.

The salon on E. 55th was Shige Kosuda and the hairdresser’s name was, as I understood it, Santoshi, a lean young guy with thick black hair. He conducted my haircut in a stylized manner that felt like a quiet, almost religious ritual that went on for a full hour and included a neck and shoulder and scalp massage. As you might imagine, I enjoyed this. And felt completely restored. Here is the haircut. 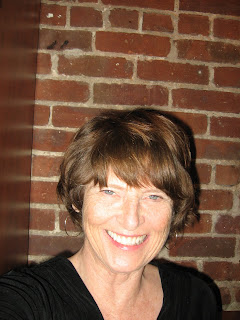 Mid-evening, I went back to the apartment and slept sixteen hours. I started my day at 5 p.m. today. This is the half-day I’m talking about. I couldn’t believe I’d slept so long. But I woke up doubly restored.

Spent the evening in the West Village, had supper at the White Horse Tavern, haunt of many writers in the 50s and 60s. My friend Dan Wakefield, author of New York in the Fifties among many other books, had asked me to hoist a pint there for him. I stopped in and hoisted a chicken pot pie and a Sprite. (Food report: the pie was excellent, but no bigger than a cupcake).

Then to a musical that’s part of the arts festival, Fringe NYC. I didn’t love it, had had enough at half-time and slunk out, though I didn’t want to hurt anyone’s feelings. Somehow, the story just hadn’t engaged me. It was about this novelist….