Email to My Therapist: Tax Anxiety

Nicholas — I’ve happily discovered I’m not the only person who gets nervous at tax time. Tax anxiety turns out to be a highly Google-able term. Lots of stories have heads like: “Survey: Young People Have Tax Anxiety” and “The Word Entrepreneurs Dread Most: Taxes” and “Tax time anxiety–Anxiety Control Center.”

These articles aren’t primarily about fear of how much the tab is going to be. They’re about fear of the whole appalling process and the risk of doing it wrong. 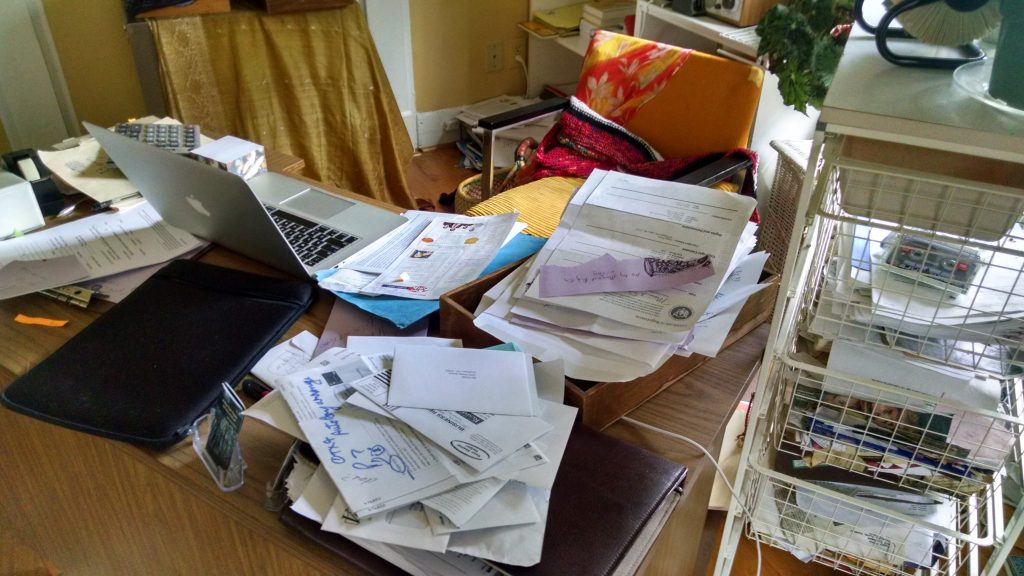 Old-fashioned desktop at the height of tax season.

For sheer unpleasantness, the tax stuff “is a chore on a par with cleaning every toilet in an NFL football stadium,” said a slightly understated article on tax preparation in The Phoenix Gazette. (There are 50 restrooms in the University of Phoenix Stadium.)

I’m unnerved at tax time even though all I do is get info ready to go to an accountant (though in my defense I’m gathering the info on two businesses, husband Bob‘s psychotherapy practice and my writing/critiquing business.)

*My tax activities don’t upset me as much as they used to. Once upon a time, I’d have a major adrenaline rush if I so much as saw an envelope with an IRS return address. Got over that one, though I’m not sure how.

*And today: I feel much much better simply knowing I’m not the only one afraid of GETTING IT WRONG. Turns out that’s what freaks a lot of folks out about this.

While I was in the midst of pulling this year’s numbers together, I received a letter from the IRS. I tore right into it without a quiver of fear. It said I’d made a mistake and didn’t pay enough last year.

Then came the rush of adrenaline.

I’ve never received a tax-mistake letter before. And it’s looking like they may well be right. If so, it was an accident!! Bob is scrupulous about taxes and I’m a maniac about almost everything. We thought I did it right. But what if they don’t believe me?! My fears immediately conjured images of Martha Stewart decorating for Christmas in federal prison.

My mother always did all the taxes for the clothing businesses she and my father owned: no accountant was involved. Her sterling example has not helped me feel better.

I used to do the whole project, accountant-less, for my own little business. The first time after I began freelancing at 23, it took about 75 hours. I felt I couldn’t afford a calculator and added all the numbers up myself — repeatedly.

A money anxiety expert in a piece I read suggested having a filling-out-tax-forms party — oh, please! can you imagine?– and/or burning scented candles while searching for documents. Might be tempting to set the whole mess of papers on fire. Anyway, I’m guessing people whose 1040s smell like patchouli have a higher rate of getting audited. 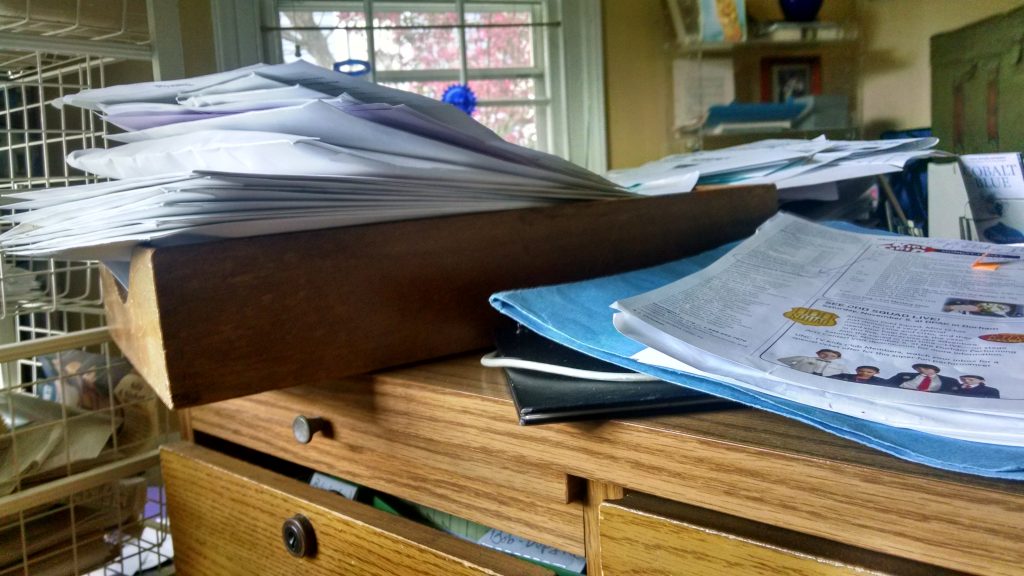 I still think of the time back in first grade when my friend Meira was sitting next to me in class already happily working away in the second arithmetic workbook (the gold one) while I was fretfully still in the middle of book one (the red one.) She grew up to be a composer; which indicates she was always naturally good at arithmetic. I keep making excuses for myself.

At times, I let teachers share the blame. A cousin of mine was one of my algebra teachers: a warm joyous exuberant person. Two trains are on the same track! approaching from opposite directions! one 12 mph faster…! Yes, it was a train wreck experience all-round. In a later math class, I often wondered if the teacher was hung over — or if he didn’t care for the subject matter either.

I recently asked our accountant if anybody lost their minds totally this time of year. He said, “Yeah, us,” referring to his fellow tax professionals. He and I are are relying on bitter humor.

Bob and I are both artsy imaginative (flakey) people. He says that no matter what mistake I make he would probably have done worse, so not to worry, not to feel bad. Kind of him to say.

Okay, I’m working on that. Making some progress. Hoping it all adds up right. And, of course, searching for other mistakes I may have made anywhere ever in my life.

And then I remind myself, it’s Easter, it’s Passover. It’s spring! April 15 is not the end of the world, not even close to the biggest thing going on. Happy April to you!