Awed By Saltwater: That Oceanic Feeling

Dear Nicholas, I’ve always been awed by saltwater. Awe on the open ocean–there’s no better place for astonishment and deep trance. Likely one reason I’m writing a biography of a woman who spent childhood years on her father’s sailing ship. And why I needed ocean sailing for my research. (This biography is now half spiritual memoir of my own.) 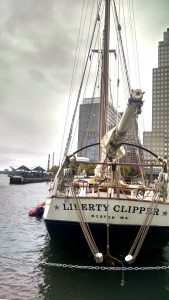 My previous post was what I learned about awe on the New York night before Bob and I boarded the schooner Liberty Clipper. We were well set up for boarding.

In spite of sky-scraping Manhattan behind us, the ship was a quick slide backwards in time, from the wooden pegs in the boards of the deck to Captain Tom Searles greeting us, white-bearded, with piratical pigtail. The sense of traveling backward was enhanced by the need to back down the narrow ladder-like stair steps as we went below to our cabin.

The cabin—it was awesomely small, roughly as long as our stacked bunks and as wide as two bunks, the luxury level somewhere between the crowd of hammocks available to many a 19th century crew and the personally fitted-out captains’ quarters of that time. 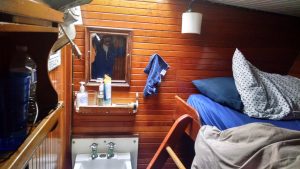 An offshore storm delayed our sailing until the next day. Nine-foot seas were rolling out there. I was a little sorry to miss that experience, since my subject Elisabeth Chant had weathered the Cape of Good Hope and many a fierce storm. But within a day or so, I was happy to have missed it. Our first night out the waves were in the five to seven foot range, which was plenty large enough. I was a little queasy, felt fine as long as I didn’t try to stand up. One wall of our cabin ran along the hull and waves, unseen, slapped and rushed past me. I loved hearing water so wild and close as I read, hearing it again every time I woke up and turned over in the night.

The next day was calm, overcast, mild. My touch of seasickness was gone. I felt the pleasure of health returned and the grandeur of an ordinary, gradually brightening morning on wide-open ocean.

The vessel itself was like and unlike the one that Chant sailed, the Cora Linn three-masted and 160 feet long, the Liberty Clipper with two masts and a length of 125 feet. I kept imagining our ship with that extra yardage; but the addition did not make a small world seem much larger. 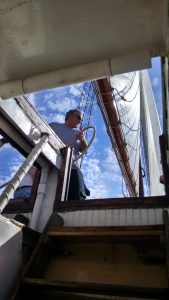 The snap of tall sails in the wind, the creak of rigging, the daunting rope ladders up the masts and into the sky—all these were the same. Both ships sailed unpredictable waters and in general a smaller ship does more rocking and rolling.

As a passenger, I had the easy life that a shipboard small child would have had. We sat on deck watching the waves, watching the crew at work as they hauled on lines, patched a sail, shouted commands and info from one end of the ship to the other, watching daylight on the water, the full moon at night. Author Joseph Conrad described so well night on the open ocean: “A multitude of stars coming out into the clear night peopled the emptiness of the sky. They glittered, as if alive above the sea; they surrounded the running ship on all sides….”

Child-like I pretended one afternoon to steer, standing for a few minutes at the ship’s wheel. I walked the deck, I watched and dreamed, and I read.

To my surprise, my standards for personal grooming plummeted as soon as I was aboard. I managed to wash my face and brush my teeth and lay on the sunscreen each day, but I didn’t take a shower once in the whole four-night voyage. Three of the four nights, I slept in my clothes. It was simply easier that way. Putting on a nightgown felt silly. Vanity, prissiness, and the call to moisturize asserted themselves again as soon as I hit dry ground, but at sea I quickly lost that part of the veneer of civilization. If I’d grown up aboard ship, vanity would have a far looser hold on me. I wonder if its absence would make more room for awe.

Life and Death on Saltwater

On Elisabeth’s voyage, there was a birth, a sister born aboard ship in Hong Kong Harbor.

And there was a funeral at sea. A seventeen year-old apprentice sailor complained of fierce bellyache, was treated for almost two weeks with remedies including quinine, barley water,  opium and laudanum. The afternoon of the day he died, Captain Chant held a service on deck, reading from Psalms and the story of Lazarus. “I am the resurrection, and the life: he that believeth in me, though he were dead, yet shall he live.”  The boy’s body was consigned to the deep.

I cannot imagine a moment more bone-deep solemn, more in keeping with the hugeness of death and life.

On the ship I so briefly sailed, there was one moment of gentle farewell, a pale echo of the one the Cora Linn crew experienced. A misguided little bird had landed on deck, a yellow-breasted warbler. Tiny and not a sea creature, the songbird stayed with us, hopping around on the wood planks, holding everyone’s attention, provoking general delight in a way that wouldn’t have happened on shore. Then the body was found. In all seriousness, a service was held. 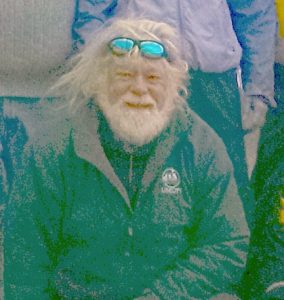 Captain Tom (left) said a few words about the spirit of the little creature, its possible reincarnation, and thanked it for the joy its company had given us. Then the body, shrouded in a napkin, was committed to the deep. It was our captain’s first burial at sea.

On my voyage on the tall ship, I had one unexpected flashback to my own childhood on the water, to those early entranced afternoons on the bow of the family motorboat. On the calmest day, we passengers of the Liberty Clipper were invited to climb, if we wished, one at a time out into the rigging at the bow, the loose set of ropes under the bowsprit, the long stout pole that extends from the prow and anchors the foremost sails. 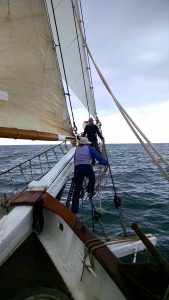 I did not find the thought of climbing out in front of a fast-moving ship appealing and said no. Then unaccountably I changed my mind. I crawled out there to where a deckhand already was perched for passenger protection.

A Look to the Deep

This time on the point of the vessel, instead of staring ahead to the watery horizon as I did for years of hours as a child, I looked back and down to where the prow was cutting through the water, neatly splitting and folding back the smooth surface, lace edges streaming away on either side. Hypnotic. Hard to look away. 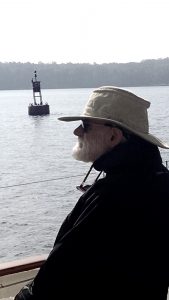 Is it any wonder that I chose a therapist and a husband (that’s Bob in the black jacket) who do clinical hypnosis?

There are so many ways that the ocean entrances and the hold is strong. For Elisabeth Chant and me, it never entirely let go. I trust it won’t.