Dear Nicholas, Almost all of my anxiety is about screwing up, causing harm or committing moral error, rather than flying or public speaking or sinister clowns. But there’s one physical activity that does scare me and yet I keep doing it. It gives me an experience of tolerable levels of fear: a sort of set point for how much fear I can stand without quitting.

This activity is downhill skiing. I’ve probably averaged a half-day of skiing a year over my adult life, just enough to never know what I’m doing and to never stop being scared. It’s enough fun that I’m willing to tolerate the fear. 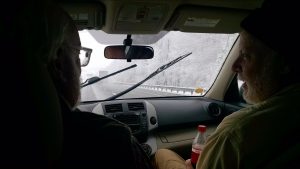 Monday I almost quit skiing, but then I didn’t. I count that a tiny triumph, though it was preceded by an undignified slide down a steep stretch in a seated position.

How Do I Stop Being Scared?

It may be that I’m a permanent ski wuss, which makes me mad at myself when I see people of all ages and shapes zipping by me. I say to myself: why am I so timid about this?

For a long time, I blamed the fact that I started off at the top of a mountain, without instruction. What happened was: decades ago, I was invited as a travel writer to go to Austria for the World Cup and to write about skiing there. The woman on the phone  said, “You do ski, don’t you?”

“Oh, yes,” I said. I’d skied once, haltingly, on a weekend in college.

The first day of skiing at Stubaier Glacier, I was so scared and shaky standing in the parking lot that I had to get help zipping up my jacket. We were taken up a sequence of three lifts into the clouds. The fog was so thick and white up there it blended with the snow. A couple of experienced skiers got vertigo. I started down, snowplowing slo-mo along a run that soon became a narrow ledge. I pretty quickly decided this was dangerous and stupid and sat down, crouching against the rock wall.

I was rescued by a good skier, an instructor on holiday. I’d thought him unpleasantly boisterous in the hotel bar the night before. Up on the mountain, he was a ministering angel. He said, “Step your skis between mine and lean against my back and hold on.” I did and he skied us down the mountain. A modified piggy-back ride. Best ski run I’ll ever have!

Since then, I’ve often thought that if I’d started with a lesson and a little technique instead of terror, all would be different, and fear wouldn’t be so installed in my brain.

But I’ve come to doubt that. I’ve taken a lesson or few since. The inner quiver hasn’t gone away.

This Week’s Adventure in Levels of Fear

My two brothers and one of my nephews and I went to Winterplace in West Virginia on a day trip Monday to ski. Four hours in the car each way. Two and a half hours of skiing in the middle.

It was outrageously ridiculously fun, hanging out all day with those three, riding into a storm that dumped five inches of fresh snow on the ground. Couldn’t have been better. Wow, do I ever love those guys! 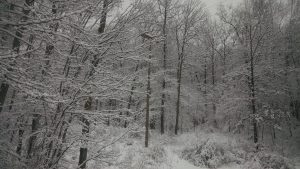 Shot from the car window, riding into snow

The skiing? For me, it had its challenges.

I won’t burden you with details of each misadventure, but just say that I got halfway down a slope too steep for me, wiped out, lost a pole, lost a ski, couldn’t get the ski back on so it would stay. The best solution seemed to me to take both skis off and give it up. But my brother Harry successfully insisted that I not quit and I didn’t. I got the ski back on, made it the rest of the way to the bottom and then found a slope that was, in Goldilocksian terms, just right.

That just-right run provided me again and again tolerable levels of challenge and fear. Maybe that’s an experience we all need, hovering just at the edge of the comfort zone in hopes that that zone will expand.

I’d prefer to simply dump the fear and skim along like the real skiers do. 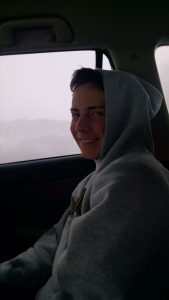 On our exuberant trip home, we stopped at a home-cooking type restaurant. Franc and I both ordered the senior meatloaf (a fresh indignity?) which was excellent, and seemed an appropriate dinner after our ungainly exertions.

I still don’t know how to dump fear. Exposure to whatever is fearsome is supposed to make it go away. So far that hasn’t worked for me. Not the fear of steep slopes and not the fear of screwing up in the rest of life. Medication helps with the latter. As for the former? I may just have to accept that I’m a timid skier. Everybody’s a little nervous about something or other, right?

But one surprising realization: in the three days since I’ve been back on dry ground, I’ve been fearless throughout my workdays, no hesitations or procrastinations or over-thinking. A heartening outcome! I hope it lasts until next winter.