My office partner Carrie who owns the building is having the place spiffed up and repainted. In this process several issues of boldness have arisen.

Most noticeably, the front porch chair has gone from pale yellow to poppy red.

And then yesterday, a wee incident raised for me some thoughts about differences in style. Carrie and I both tend to overworry about whether we’ve stepped on someone’s toes. I also see myself as a fairly mild-mannered sort. 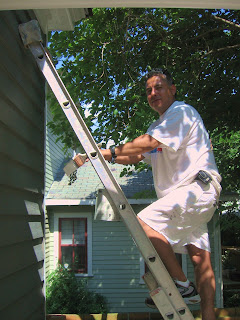 I had gradually glazed out on the fact that there had been workmen all over the building for days. And then my copier/printer got snarled-up and refused to proceed. I went over to the rebellious thing, which sits just below a window, and tried to fix it, all the while unleashing a staccato of the harsh and obscene language I reserve for malfunctioning machines. Didn’t realize that I was speaking within inches of the nose of the man working on the windowsill on the other side of the glass. After all, we’d been professionally ignoring each other quite successfully for days.

My response to this realization, not so bold: I turned around and walked out of the room. A little embarrassing, a lot funny: that was my reaction.

I told Carrie the amusing news. She thought it was funny too. Then she went out and assured the largely Spanish-speaking crew that all was well and they hadn’t done anything wrong and that it was just me having an outburst over mechanical difficulties. She explained to me privately that they’re a particularly sweet and sensitive bunch of guys.

I’m not accustomed to being on the raunchy side of such moments, especially with construction workers. Not used to being apologized for, or to finding such a small awkward moment increasingly hilarious. I’m not sure where the path of proper boldness lay here, but find it refreshing to be, for a change, the mouthy brash explosive one.