Number 9? This means that I’m at the halfway point in my 18-day extra-life-within-a-life. As a New Yorker, I’m middle-aged.

But I’m not taking this as a sign that I should re-assess, have a crisis, or do anything differently in my New York adventure. I’m going to keep on poking into things on whim.

I worked some yesterday on getting ready to talk with a book editor today. Then went off to “New York’s largest witchcraft/goddess supply store,” Enchantments, Inc. on E. 9th in the East Village. At the time, I didn’t think the meeting prep and the store visit were related, but now I wonder. I did glance twice at an orange Success candle.

The low-ceilinged little store was rich in atmosphere, deeply worn floorboards with ground-in sparkle as if from old meteor showers. Incantatory smells. Soothing music. And shelves and shelves of jars of gathered-from-nature mysterious materials.

Fascinating story about the place in a 2008 New York Times. If I’d read it first, I might have bought the orange candle.

I’d planned on having lunch at an appropriately atmospheric place nearby, Cloister Cafe, with its monastic stained glass windows, suit of armor, wall sword, etc. But, no. Closed on Mondays. I peered in the window and absorbed the medieval darkness.

Food report: I wound up around the corner at a Japanese bakery and sandwich shop, Panya. Had a salmon sandwich on a baked-on-the-premises-that-morning baguette. The bread was wonderful, better than salmon.

Then a long train ride uptown in time to catch an ethicist giving a talk at PicNic Cafe, an Alsatian bistro. The $10 ticket included one drink.

The subject was the moral value of “negative” emotions, such as anger. The speaker was a Columbia philosophy professor, Macalester Bell, who described herself as “a recovering Kantian.” I have no idea what that specifically means, but found her very thoughtful on what constitutes moral anger: the acknowledgment of wrongdoing, etc. She was quite young and seemed charmingly un-angry –and has taught previously back home at UNC.

At the end of her talk, she asked us to please be kind to the wait staff: she did that kind of work for years and knew that it could stimulate lots of negative emotions.

The wait/philosopher and the goddess store: that’s the kind of combination I’m finding intriguing in these days here. Note the combo of business and building in the photo below. The CVS in Raleigh was never like this. 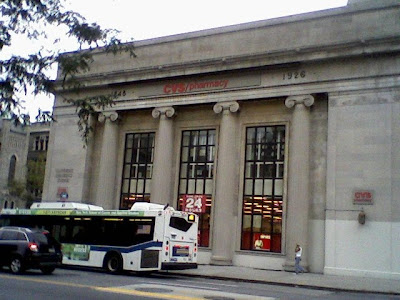