Sunday was Rap Day for me.

First, brunch at The Grey Dog in the West Village. Highly recommended spot, but I was there to say hi to the daughter of a friend back home who waits tables at the cafe when she's not going to auditions. She just got a one-month role on Seinfeld! But she was off yesterday and so I left my note to her with the very charming young maitre d'.

Then, to the rap. It was one of the free summer concerts in Central Park and headlined a piece of hip hop history, Public Enemy, the first rap group built on a political pro-black message — and the first to go worldwide in acclaim.

All very interesting, of course, but what draws me is the spirit and the pounding beat. It was one dancing crowd yesterday, never mind that it drizzled and rained much of the afternoon, and that most of us were standing. I stayed just short of four hours and got a rousing good workout.

I don't have a lot of friends at home who share my interest, but on my 18-day Bold Bonus Life in New York, I'm mostly by myself anyway. So I went. Looking for the bandshell (you'd think something like this would be easy to find) I fell in walking with a guy I'd asked directions; he was also looking for the place — Rob, a dapper fortyish black comic book illustrator. Then added on a middle-aged Italian woman, Silvana, who updated us on Italian rap. The male security guy frisked Rob and peered into the purses of Silvana and me. Then we went our separate directions into the already large crowd.

I listen regularly to hip-hop on my car radio. But I don't pay attention to who's rapping. (Same with every other kind of music, but not at all the case with books.) So I kept thinking Public Enemy had arrived. The warm-up seemed plenty rhythmic and well appreciated. Blitz the Ambassador, of Ghana and Brooklyn, was a good concert in himself.

The crowd was wonderfully multi-cultural and diverse. Directly in front of me for much of the time, was a scrawny young guy in yarmulke with the fringes of his prayer shawl hanging out from under his T-shirt. He danced almost continuously — and well!– for most of the three hours and 50 minutes I was there. His apparent date, a large black woman, was more of a quiet foot-tapper. There was even a couple behind me who appeared to be of my advanced age.

The music was still going when I left. I could still hear it halfway to the edge of the park. It's a wonder I'm hearing anything this morning.

Here's the sorry picture I took with my phone held blindly overhead. That crowd was moving, though it doesn't show. 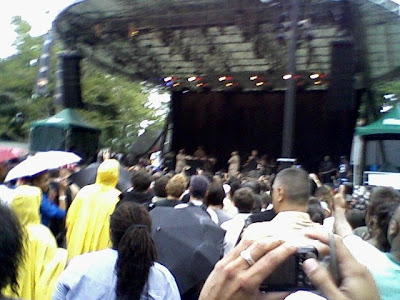 Actual knowledgeable reviews online today include this item at Crawdaddy.

Not sure yet what I'm up to today.

Add to del.icio.us – Stumble It! – Subscribe to this feed – Digg it