Friday was the final day of my 18-day extra life as a New Yorker. As Audrey Hepburn at 28.

This two-weeks-and-four-days experience was a tremendous success for me. I loved it. I do feel satisfied now that I’ve had a Manhattan life. Just as I feel satisfied that I had a life in India, in the three months I spent there researching my novel Sister India.

These were not mere trips. They felt entirely different. They included laundry, and ups and downs, and seasonal change, and neighbors. And enough time to dabble, and get lost, and have second chances.

I feel so lucky and grateful to have gotten to do this. And I’d had my mind set on it for almost two years, so I’d really built up an appetite.

My last day was, as usual, a long long walk. Some of it in circles. I decided to “do” a large chunk of the East Side, especially the area sometimes known as Spanish Harlem. I began by setting out to walk from the West Side apartment across Central Park. I decided I knew the place well enough by now that I could take a path instead of following the road.

After 30 or 40 minutes of walking, I saw traffic and buildings ahead. Success! I walked a few blocks into what I took to be the East Side. Then came upon Broadway. But that’s on the West Side!! I’d made a great loop through the park and come back close to where I’d started.

So I headed back into the park and this time came out on the other side. Took a subway north to begin my walk back.

Then I got off the train too soon and saw only a few blocks of Mexican restaurants, and a Dominican one (harking back to the Dominican Day parade on my arrival day) and was soon into the cushiest neighborhood of New York, browsing designer windows. On an earlier day I might have gotten back on the subway and started again. But I was running down. I decided to settle for luxe window shopping, with an emphasis on shoes.

Photo report: random things that caught my eye, including moss between stones on a wall in Central Park (a visual metaphor?). 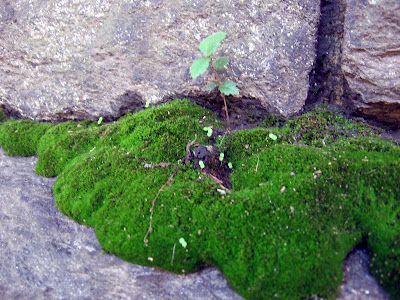 That night, my overnight, amazing-bargain-for-$30, express bus was to leave Chinatown at 10 p.m. For about twenty tense minutes, I thought I was going to miss it. Once again on this last day, Manhattan took the opportunity to show me that I didn’t exactly have a grip on the place.

First, the subway ride was longer than I thought. Then, for the second time in the day, I confusedly got off a stop too soon. Then got bad directions and ran in the wrong direction with computer and heavy, heavy suitcase. Realized I’d gone wrong, and picked up speed in the other direction. Then thought: Get a cab, you idiot! (My sweet shrink husband Bob says to me at such moments: Don’t talk that way to my wife.)

Cabs passed me by. With luggage, I looked as if I were heading for the airport at a time when it would be hard to get a fare back.

Finally, a nice driver stopped for me. He hadn’t heard the name of the cross street before, but we figured it out. Got there only about 30 seconds after the supposed deadline.

The bus was then delayed a full half hour, waiting for three people who were running late.

The ride back wasn’t as easy as the straight-through bus ride that had brought me to New York. This time, we stopped twice. Each time the bus driver turned on the lights and announced a ten minute break. Thus waking everyone who’d gone to sleep. Twice that happened.

In the morning, we rolled back onto my home turf. Exhausted, I went home and went to bed.

Now, a day later, I’m recovered. I’m back in the regular life I most want: living with Bob out in the country, driving most days to my little office in Raleigh. I also have the full feeling of just having had a whole extra life– in Manhattan.

I so love this idea of tucking in a bonus life.

I mean to keep writing on the subject here — different kinds of extra lives, and how to make them happen. What could be bolder?

I’d love to hear your story about your own such experiences, and the one you’re planning. 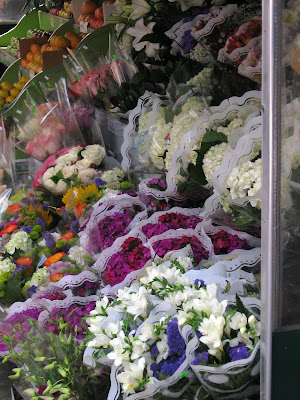