Living with “an Animal Guy” in an “Animal House”

Dear Nicholas, I have just this week realized that we have animal images all over the house, Bob’s doing. How did I not notice the theme? And how do all these animals affect me? I don’t entirely know, but at the same time I have no doubt that they do. 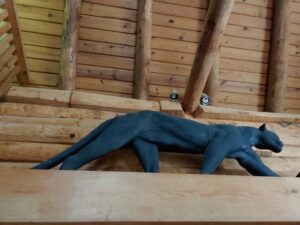 Living room black panther, loaned by artist’s son  who doesn’t have space for a big cat.

I’ve always thought I could live happily in New York (if it were cheaper), though I never have. The choices I’ve actually made in my life have taken me to the woods where I am happy indeed. We have lots of what we refer to as “nature experiences” with real animals outdoors. 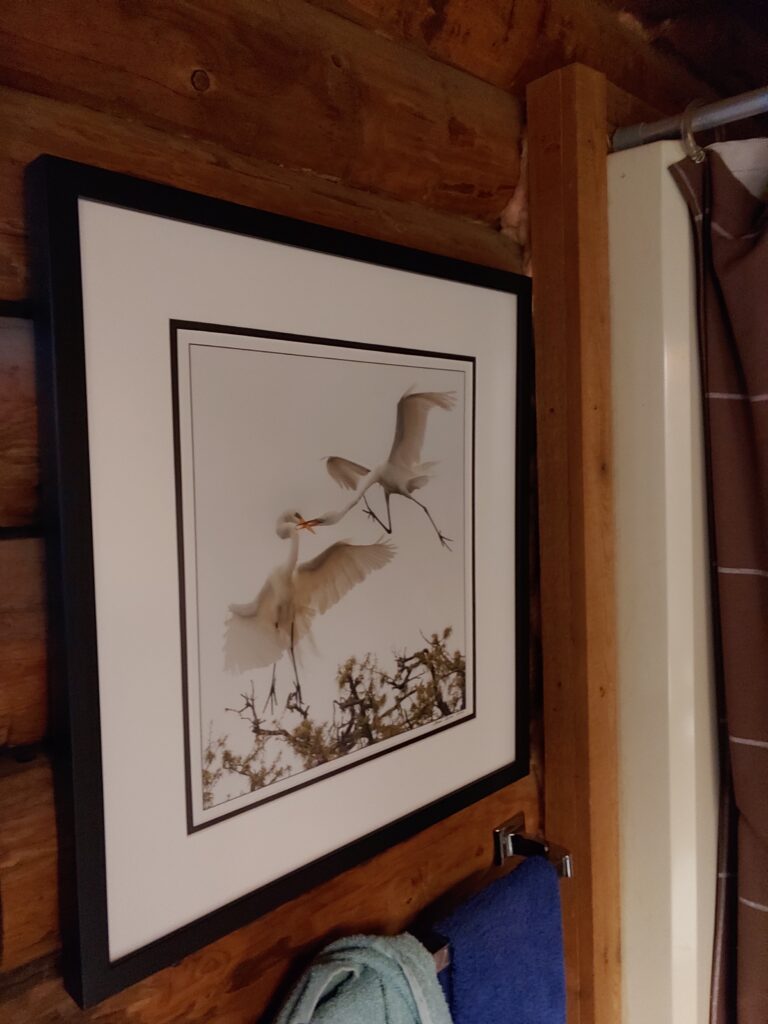 The Ones with Personal Names

Indoors, much of the time, are two giant dogs and two rather large goldfish. 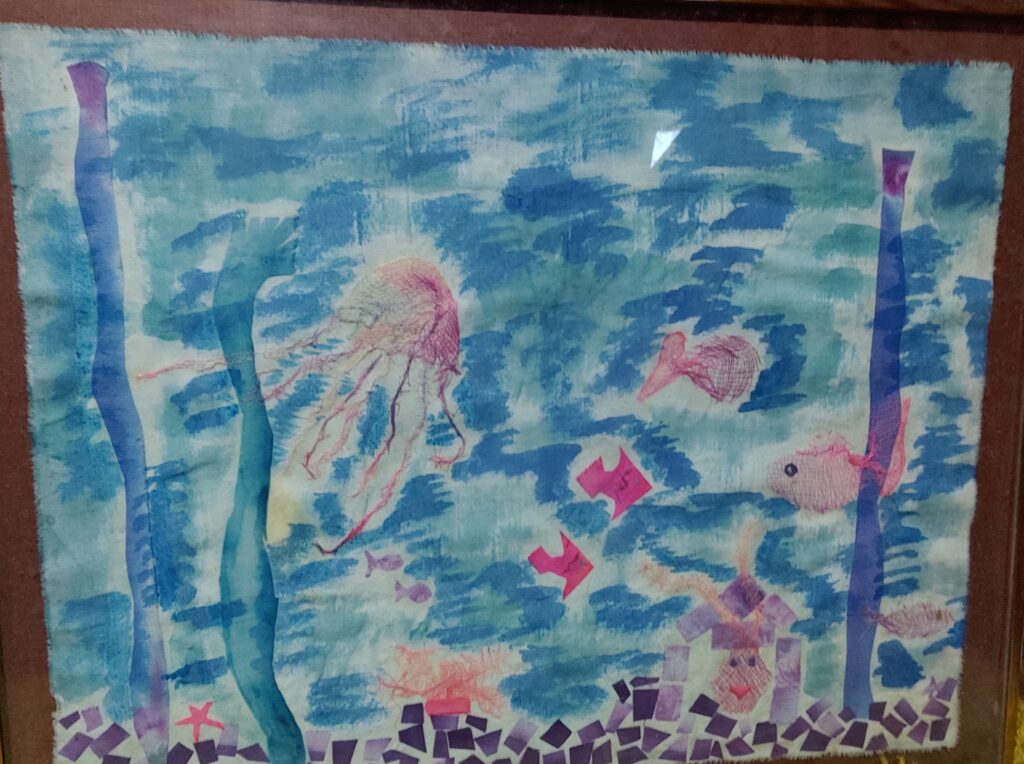 I am not a writer who describes myself on book jacket flaps as “living with my husband, x dogs, x gerbils and a hamster” or some such, as so many writers do. Bob is the dog guy at our house; he trains and dishes out the kibble. The dogs are not so much part of my schedule or identity. But I am the patter-in-chief.

The Animals Do Affect Me

I am deeply affected by these great creatures: I love Carlo madly and feel such protective affection for Kirra, who is newer to us. And unlike the animal art, there’s no ignoring them. Kirra outweighs me, Carlo wants near-constant ear-scratching, and dog hair turns up in surprising places like the freezer. 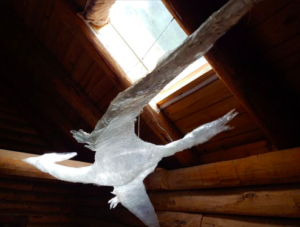 But the animal images everywhere! I only noticed the overriding theme a week or so ago when a new piece of animal art arrived. Bob had ordered us a beaded owl (whom we’ve named Fauci.) 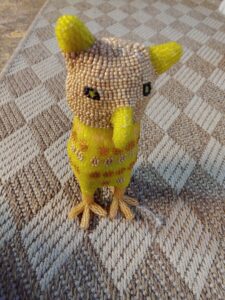 Somehow that one made me look around and take stock: of the fighting egrets in the bathroom, the metal goat in the den, the pterodactyl sailing across our living room, the Costa Rican frog postcard thumbtacked to the bedroom wall. 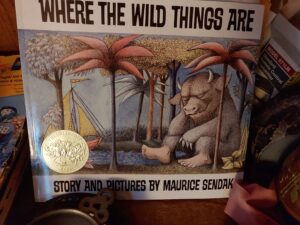 There also be dragons on our walls…

What I Didn’t Notice

This is not the first time I’ve failed to generalize, to notice a pattern. One of my worst moments of blindness as a reporter (and one of my better moments as a human, I like to think) was when I was sent to do a story on Wheeler Airlines. I didn’t notice that every one of the several people I interviewed was African-American. I wrote the story without finding out that this was a black-owned air carrier, the first ever approved by the FAA. I could have told you the race of whoever I was that moment talking with, but failed to  notice the newsworthy pattern. 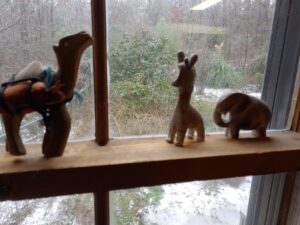 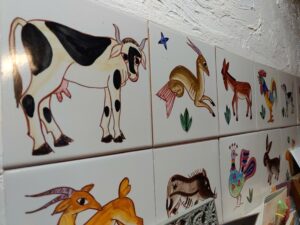 I did know Bob liked dogs and birds and “nature experiences.”  But somehow I didn’t get quite get how pervasive his animal interest is. 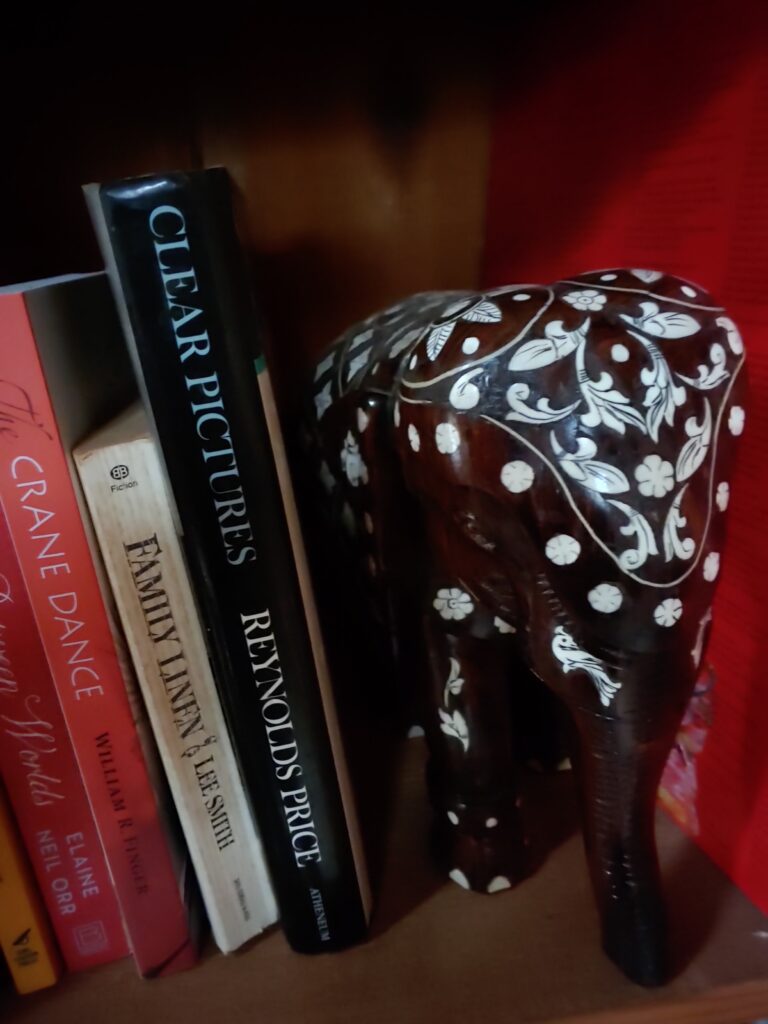 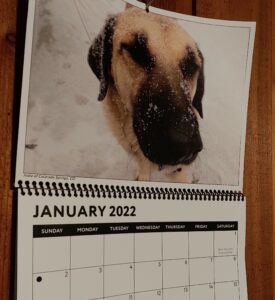 I started to catch on maybe a year ago when I posted a picture of a possum that I’d gotten from a stock agency (haven’t been able to get a local one to stand still for a picture.)

Exotic O’Possum: How Did He Know?

He glanced at it and said that’s an Australian possum, not one we have. Correct! And he knew this? I was astounded. He shrugged, said, “I’m an animal guy.” 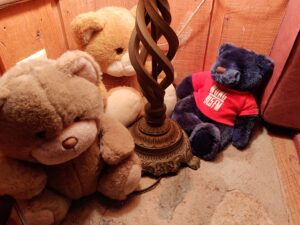 Well, turns out I live in an animal house. Fine with me. Helps keep me a bit in touch with the wild side, whether I know it or not. I was once early in my life accused of being interested only in words and ideas. That was never true, of course, but I could see the  exasperated gentleman’s point. I’m a words-and-stories person. 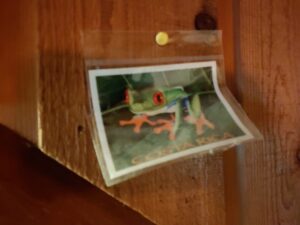 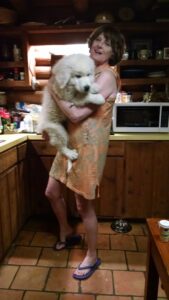 Carlo as a puppy four years ago