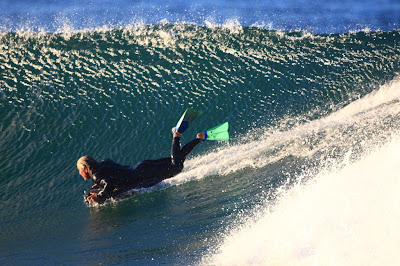 First let me say that this is not me.  When I tried it, I rocketed straight toward shore, didn't try to "get into the curl;" it almost seemed as if the shore was instead speeding toward me.

The sport is surf mat riding, which might bring to mind the familiar flimsy pool toys.  This is a different deal — and really deserves a different name.

This picture is from the Magic Towel Ride blog, which also has videos of how it's possible to fly on one of these new mats.

I found out about it from my brother Harry, and we conveniently turned up in our coastal hometown on the same Sunday afternoon recently.  He and two of his boys were in the water, taking turns with this new toy.  I joined them.

The mat is short and you steer it (maybe) by leaning your weight from side to side and/or by squeezing the air from one side to the other.  You can also pull the partially inflated mat into a point at the front to go far faster than necessary.

You wear fins in order to kick hard enough to catch a wave.  Since I couldn't wear the Men's Large pair that the guys were using, Harry pulled the mat and me to the right spot and then let go.

Wow! wow! wow!  It's wonderful fun.  It meets the classic criteria for recreational adventure (including crossword puzzles); it presents just enough challenge, tricky and speedy enough to be exciting but not so much that I felt as if death was imminent.   With surfing, standing up felt dangerous and I did get knocked pretty hard in the head  by the board; not saying I won't try it again.  But I know I'm going to do this again.  And soon….