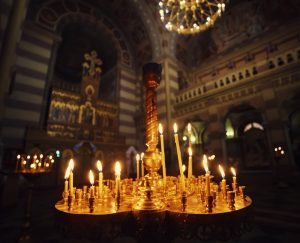 Nicholas, Here’s my bookish version of a Christmas card: a troubled minister’s moment of respite on Christmas Eve, excerpted from my novel Revelation:

The Christmas Eve service alone would be enough, Swain thinks, to keep me in the ministry. Troubles always go away, at least for that hour. Now the opening music and stirrings have passed. Quiet has settled over the congregation.

He talks into almost-darkness. The candles behind him on the altar flicker on the faces out there. “ . . . To rekindle our sense of wonder in Thy majestic ways and to look to the Christ as our Star of Hope.” It is only minutes until midnight. The dark makes it a campfire circle, drawing them all in. The eve of Christmas. Christ has never been his one Star of Hope, though he doesn’t go around admitting that. Only God. Not God the Father. Simply God. Yet he is so moved by it all, seeing them all out there.

The church is full of the long looping ropes of evergreen. He reads: “And lo, the angel of the Lord came upon them, and the glory of the Lord shone round about them: and they were sore afraid.” Now the kids begin to read. From the balcony, Bobby Burroughs: “And the angel said unto them . . . .” Now Melissa, standing beside her mother, down near the front. Her voice is like a wisp of dandelion puffball on the air, it’s so light. Her mother moves her own lips with the words. Near the front, Jakey stands and recites: “Behold I bring you great tidings  . . . . ”

Swain watching him, feels his chest actually swell. He tries to meet Julie’s eyes, but she’s turned toward Jakey. The sanctuary is silent. The silence goes on: Swain jumps. It’s his turn to read. He scrambles to find his place, “And all they that heard it wondered at those things which were told them by the shepherds.”

Bill Bartholomew keeps his eyes on Swain reading. He shakes his head. The man doesn’t even know when it’s his turn to read. Even the smallest children are picking up when they’re supposed to. Not Hammond. Standing there with that odd disoriented look he has.

The reading ends. They rise to sing. As the congregation stands out there in the semidarkness, Swain sees more clearly the faces. No one bends over a hymnbook; everyone knows the words. “Silent night, holy night, all is calm, all is bright.” He looks out at them: Frances Eastwood, with her whole family; the Haddonsfields, the Morrises; kids with dates; people jammed in together on crowded pews, half of them people he doesn’t know. It’s like a homecoming – he loves it. He doesn’t even like the rest of Christmas. He just wants this, to hold them all here in this moment through tomorrow.

Bernie has his arm around his youngest, who is standing next to him on the seat of the pew. He almost didn’t come. He didn’t even want to think about what kind of performance Swain was going to put on at Christmas. But the guy doesn’t have to make a move or open his mouth. You still know there’s something real wrong there. Look at his face right now, that far-off look, it’s like looking at some wild animal’s eyes, something that doesn’t care about anything civilized.

Swain says in a voice softer than his usual pulpit tone, “Will each of you please light the candle you hold and carry it with you as you go from here, as sign of the light that has come into the world anew again tonight.”

Now there is only darkness and candles and the hint of a face in the shadows above each flame, as the flame is passed from candle to candle up and down the rows. 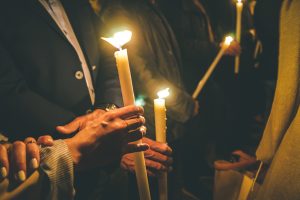 The quiet deepens. He looks out at hundreds of flickering lights, and raises his arms. He would give them everything he has. He doesn’t hate anybody in the world. “The grace of the Lord Jesus Christ and the love of God and the fellowship of the Holy Spirit be with you all.” If he could just hang on to the way he feels now . . . .

Wishing you the best of holidays and many wonderful new years,